A disturbing exposé of the American governments hidden agenda, before and after the Sept.11, 2001 terrorist attacks. 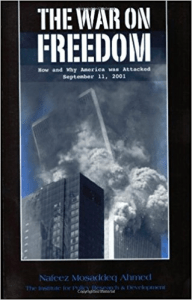 A wide range of documents show U.S. officials knew in advance of the “Boeing bombing” plot, yet did nothing. Did the attacks fit in with plans for a more aggressive U.S. foreign policy? Nafeez Ahmed examines the evidence, direct and circumstantial, and lays it before the public in chilling detail: how FBI agents who uncovered the hijacking plot were muzzled, how CIA agents trained Al Qaeda members in terror tactics, how the Bush family profited from its business connections to the Bin Ladens, and from the Afghan war. A “must read” for anyone seeking to understand Americas New War on Terror.