1000 Years for Revenge is a groundbreaking investigative work that uncovers startling evidence of how the FBI missed dozens of opportunities to stop the attacks of September 11, dating back to 1989. 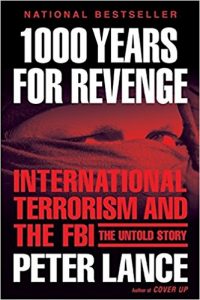 Award-winning journalist Peter Lance explains how an elusive al Qaeda mastermind defeated the entire American security system in what the author calls “the greatest failure of intelligence since the Trojan Horse.” Threading the stories of FBI agent Nancy Floyd, FDNY fire marshal Ronnie Bucca, and bomb-maker Ramzi Yousef, Lance uncovers the years of behind-the-scenes intrigue that put these three strangers on a collision course. An unparalleled work of investigative reporting and masterful storytelling, 1000 Years for Revenge will change forever the way we look at the FBI and the war on terror in the twenty-first century.