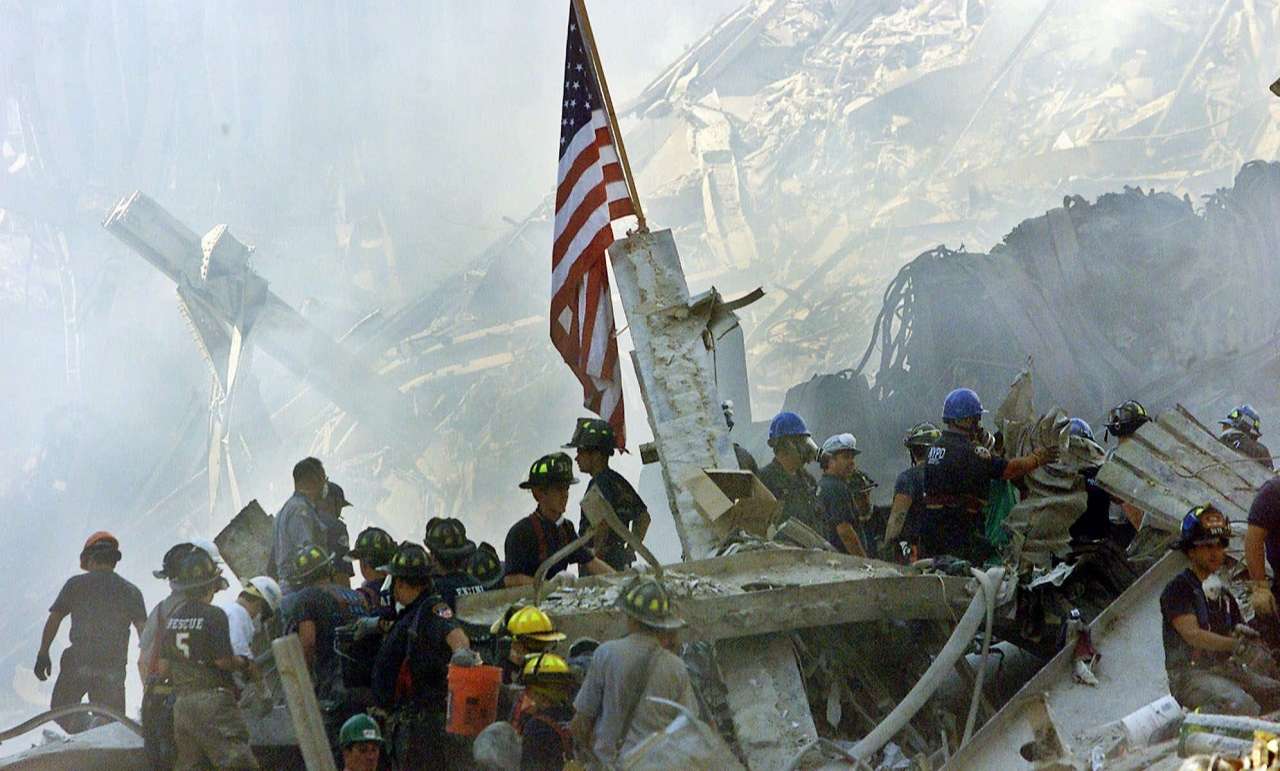 1.In 2000, PNAC, the influential neo-conservative think tank “Project for a New American Century,” wrote that if the US wanted to maintain their position in the world and expand it further, they would need a new drama like Pearl Harbor to make the American people warlike again.

2.All planes that bear away above American territory are usually intercepted by fighter jets within 10 minutes. On 9/11 this did not happen at all with the 4 hijacked aircraft. Why not on that day? And why were large-scale military exercises going on?

3.The Twin Towers were hit by a plane at a different height and at a different angle. Yet they collapsed in almost the same way: smooth, explosive, symmetrical, within 12 seconds and through 70,000 tons of cold, intact, structural steel. So strangely enough by the way of most resistance!

4.WTC 7, a 47-storey and 190-meter high skyscraper, was the 3rd tower to collapse at 5:20 PM on 9/11. Without a plane flying in. The small fires that were raging there had been extinguished for some time when the tower suddenly came down like a controlled explosive demolition. The Dutch explosive demolition expert the late Danny Jowenko fully endorsed this when in 2006 he was shown the unknown images of the collapsing building in a Zembla TV broadcast.

5.WTC 7 collapsed during the first 2.25 seconds with the free-fall speed. That is about 30 meters, or about 8 floors. This fact is even fully recognized by NIST (the American TNO). However, it means that the entire support structure, including all connections on those floors, had completely and simultaneously lost their function. An office fire can never cause this and until that day it had never happened in a tower with a steel support structure. On September 11, 2001 it happened three times in one day!

6. WTC 7 owner Larry Silverstein already ordered SOM architect David Childs in April 2000 to design a new building on the site of WTC 7, while the building was only 13 years old and well let! Was it his special business instinct or did he possess a certain amount of prior knowledge?

7. The American research institute NIST (National Institute of Standards and Technology) stated that it had found no evidence for the use of explosives. Upon inquiry it turned out that they had not looked for it, despite the fact that this is a standard requirement for such incidents!

8. The 9/11 Commission was established 442 days after the disaster day at the insistence of the bereaved. The Commission had too small a budget, was instructed in advance, ignored eyewitness reports and ceased important evidence. The presidents later stated that the committee was set up to fail.

9. At the Pentagon, where the 3rd hijacked aircraft would have flown in after a difficult maneuver, the crime scene was entered and cleaned up immediately after the attack. Despite the many cameras around the building, clear images of the crash have never been released. In Shanksville, Pennsylvania, the crash area of ​​the 4th hijacked aircraft showed an empty crater. Emergency services reported to the press that they could find absolutely nothing. No aircraft parts or people, nothing that pointed to the crash of a large airliner.

10. A few weeks after 9/11, former NATO general Wesley Clark was told by a colleague in the Pentagon how 7 countries were scheduled to be invaded in the following 5 years: Iraq, Syria, Lebanon, Libya, Somalia, Sudan and finally Iran. It didn’t go that fast, but the list is almost complete.

These are just 10 examples of the many sensational issues associated with each other around 9/11. It is inconceivable that one man in a cave in Tora Bora managed to coincide with this coincidence of special circumstances, without having cooperated with criminal elements within the American government. If he has already had anything to do with it – there is still no evidence for that. The FBI also agrees.

Investigate and discover the other facts about 9/11

To help you on your way, we have the most important websites, documentaries, movies, studies and articles collected for you.

Also refer to our BLOG (Dutch and English).