To read the newspapers or listen to the radio, one would think that questions about the official account of events of September 11, 2001 come only from a fringe group. But this is an illusion, consciously propagated, we believe, by government agents and their mouthpieces in the mainstream press. In a series of public opinion polls, roughly half of Americans were shown to doubt that the government is telling us the truth about 9/11, and the numbers are growing each year. 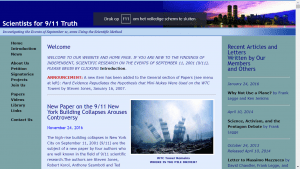 The truth is that among independent scientists with no axe to grind, a large proportion of those who look into the 9/11 evidence find grounds for doubt. A few have put their reputations and careers at risk in order to speak out about that evidence, and what they see. In 2010, larger numbers of scientists have joined together and contributed their expertise to create this web site.