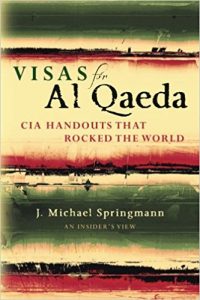 Thousands of American soldiers and civil servants have lost their lives in the War on Terror. Innocent citizens of many nations, including Americans killed on 9/11, have also paid the ultimate price. While the US government claims to stand against terror, this same government refuses to acknowledge its role in creating what has become a deadly international quagmire. Visas for al-Qaeda: CIA Handouts That Rocked the World sets the record straight by laying the blame on high-ranking US government officials.

During the 1980s, the CIA recruited and trained Muslim operatives to fight the Soviet invasion of Afghanistan. Later, the CIA would move those operatives from Afghanistan to the Balkans, and then to Iraq, Libya, and Syria, traveling on illegal US visas. These US-backed and trained fighters would morph into an organization that is synonymous with jihadist terrorism: al-Qaeda.

J. Michael Springmann, a former US diplomat, names individuals and organizations that deny culpability. He analyzes the effects of a nebulous war on the US economy and infrastructure. After thirteen bloody years, Springmann exposes hypocrisy and deceit wrapped in a sullied flag of patriotism and honor.